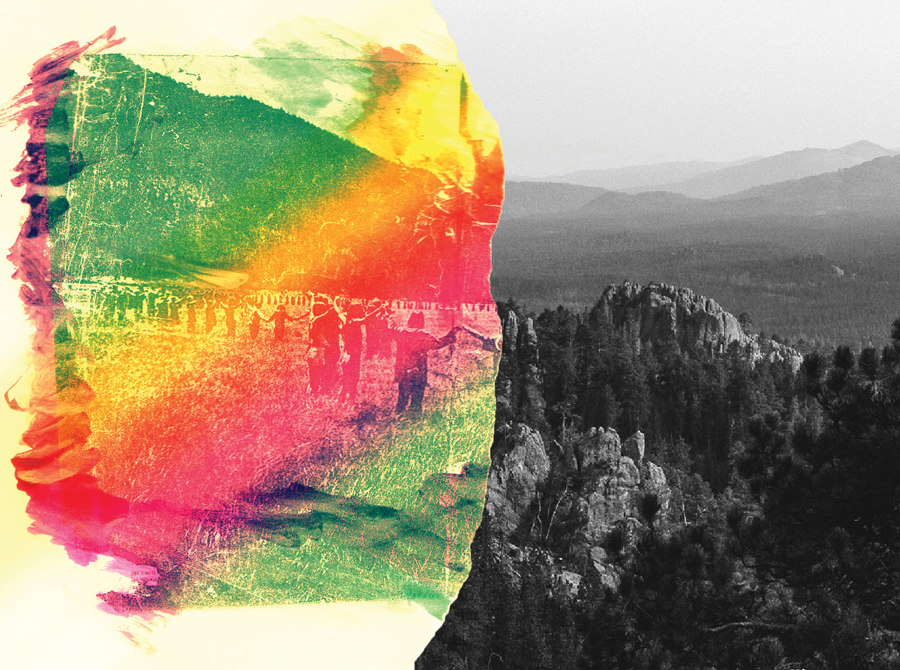 The Black Hills rising from the Great Plains of North America in western South Dakota is sacred land to many Native American tribes. Yet it is this indigenous Treaty land that some members of the countercultural community of Rainbow Family elected as location for this year’s annual National Rainbow Gathering, without the prior consultation of First Nations.

If you’re no stranger to The Third Eye, then you’ll already be familiar with Rainbow (find out more with the magazines and online stories if not!). Held between 1st July and 7th July, the US National Rainbow Gathering brings together thousands on National Forest Land, where the Rainbow Family of Living Light has been assembling since 1972 – a child of the Sixties counterculture, you might say.

There is much in Rainbow that is inspired by indigenous culture, be it through the use of tipis, sweat lodges, ceremonies or the telling of the Indian Hopi ‘Rainbow Warrior’ prophecy during Gatherings.

Today, this leaderless and self-proclaimed ‘non-organisation’ has become a global phenomenon, regularly gathering to build an ephemeral community in the middle of nature, to celebrate Love, Peace, Unity and Respect, and to co-create an alternative, sustainable lifestyle.3

So how is it that the Rainbow Family of Living Light, who has previously had good relations with native peoples in the US, found itself in conflict with the Lakota Nation? Why did so many members of the Rainbow Family decide to “boycott” the Black Hills event and set up three other Gatherings around the country?

The fight to uphold indigenous peoples’ land rights is one close to The Third Eye’s heart. And as someone who has been inspired by Gatherings and attending them around Europe and Mexico since 2010, The Third Eye felt compelled to report on this story. 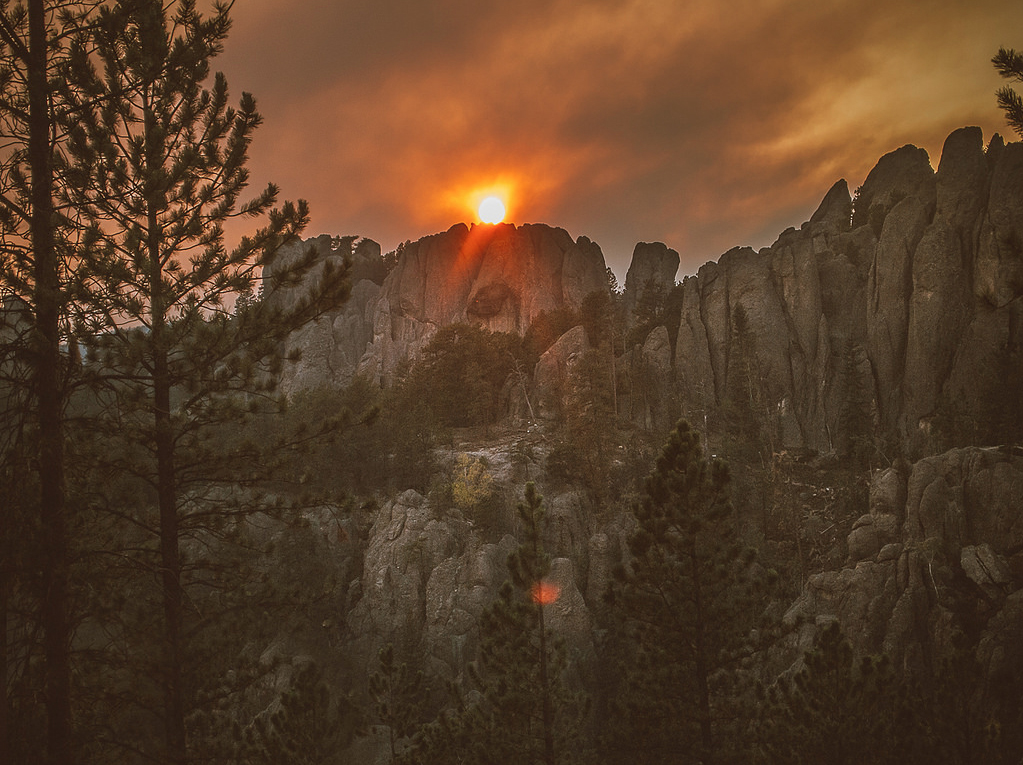 “I feel that the Rainbow Family of Living Light is encroaching on Lakota land with total disregard to our way of life and Spirituality as individuals, as sovereign people and First Nations people”, tells us Nola High Elk West, a woman of Lakota, Mnicoujou tiospaye from the Cheyenne River Sioux Tribe.

The Black Hills, or Pahá Sápa – “the heart of everything that is”, as they are known to the Lakota Nation, are the sacred land of several Native American tribes. It has been a site of profound cultural, spiritual and ancestral importance for 12 000 years, where prayers, vision quests and ceremonies such as the Sundance are practiced to this day. “We still have a deep and real communion with the spirit world and Mother Earth”, says Keith Janis, a Lakota Grandfather and Tokala leader from the Pine Ridge reservation in South Dakota.

“Their scouts should have been wise enough to know that the Black Hills is unceded Treaty Territory and our Garden of Eden”, says Joye Braun, a Native activist from the Cheyenne River Sioux Tribe of the Eagle Butte reservation in South Dakota. 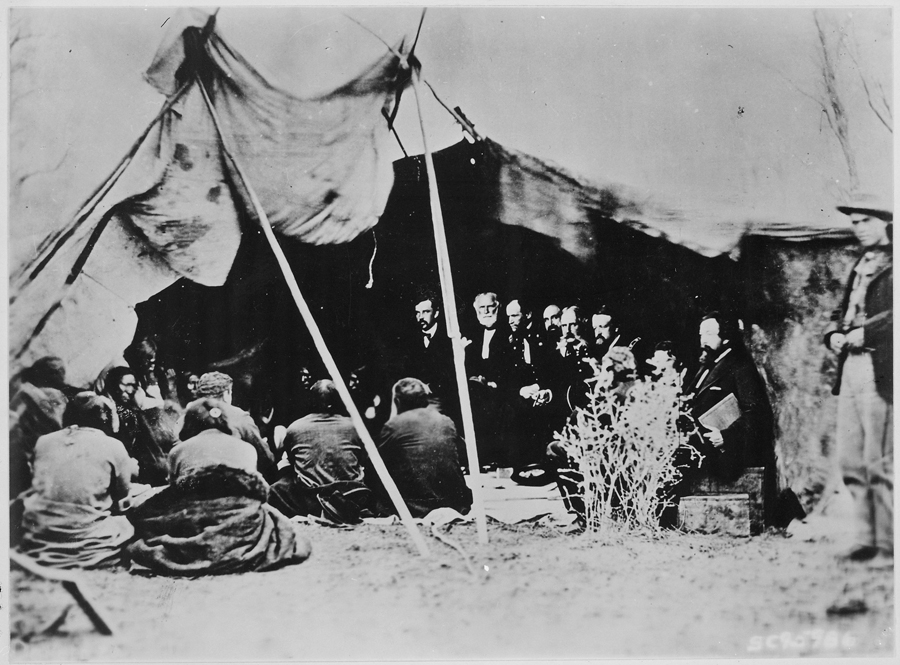 Today, the Black Hills is the site of political and legal confrontation, a casualty of one of the most blatant land grabs in U.S. history. In 1868, the U.S. government signed the Fort Laramie Treaty (pictured right), exempting the Black Hills from all white settlement forever. But “in 1980, the U.S. Supreme Court recognized the Black Hills had been illegally stolen from the Lakota”, says traditional Lakota leader Canupa Gluha Mani, headman of the Lakota Strong Heart Warrior Society. “The Black Hills is not U.S. National Forest, park land, public land, or America. The Black Hills is Lakota territory.”

Many Rainbow Family members urged others to stay away from the Black Hills Gathering, or the “(un)rainbow (non)gathering occupation of Black Hills, Lakota Territory”, as some called it. “90% of the family was dead set against going”, says an anonymous Rainbow Family member, who has been attending for 27 years. “I feel that instead of creating unity we brought division among both the Lakota people and the Rainbow Family”. 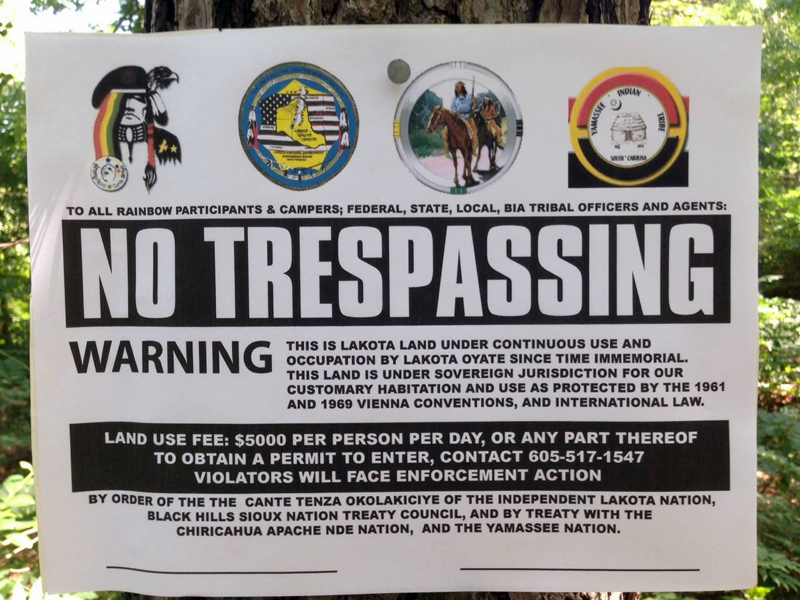 On the ground, positive reports were nevertheless being made. “The situation on the land is amazing. The locals and the indigenous welcome us with open arms”, The Shining Light Kitchen told The Third Eye.

“There was a spiritual presence at that gathering that left me in awe”, told us Rainbow veteran Richard Knopf, “the July 4th silence & prayer were wonderful and emotionally moving”.

Some Native people voiced their support for the Gathering and even attended it, such as Chase Iron Eyes, a Lakota writer, activist and co-founder of The Last Real Indians, who called for an alliance between the Rainbow Family and the Lakota Nation: “I feel that it’s time for indigenous peoples, the original nations of this continent, to step up. Instead of creating division, we should be creating alliances and building bridges. […] I hope the Rainbow people stay in the Black Hills until the United States does the honourable thing and returns all federal lands back to the Lakota, Cheyenne & Arapaho & pays us for the 74 Billion taken in gold alone.”

“I feel that it’s time for indigenous peoples, the original nations of this continent, to step up. We should be creating alliances and building bridges”, says Chase Iron Eyes, a Lakota activist and writer

Speaking of the Rainbow Gathering’s alternative lifestyle, Chase Iron Eyes comments: “Think before you make your mind up about whether we should welcome or demonize the Rainbow Family, they are seeking a new reality just like us.”

“There are a number of other long-term plans in the works, all involving strengthening the alliance we’ve now just created.”

Some Rainbow Family people report that alliances were created with the few Lakota who attended. “We had everyone from members of the treaty council and regular tribal councils (Pine Ridge and Rosebud) to Grassroots AIM, traditional grandmothers, and many others coming through and blessing our gathering”, says Teryani Lebendig, a Rainbow Family member attending since 1992. “There are a number of other long-term plans in the works, all involving strengthening the alliance we’ve now just created.”

“The positive connections that the Family made with the few Lakota who showed up in the Black Hills will hopefully bear good fruit”, says an anonymous Rainbow Family member, who was invited by the Lakota to mediate between the Lakota and Rainbow peoples at the Black Hills Gathering. “Nonetheless, we’ve damaged our relations with all traditional societies by our actions in the Black Hills, by failure to follow protocol. This may take years to repair.”

Meanwhile, in California, on July 4th, an echo of the Black Hills Gathering conflict was manifested, as the Winnemem Wintu tribe raised a “Cease and Desist” order, asking the Rainbow Family to leave the Mount Shasta region where a regional Gathering was taking place.

“I hope someday this Family will be less splintered by the deep divisions that plague not just this year’s Gathering, but our larger family of humanity as well”, says Keith Janis, a Lakota Grandfather and Tokala leader from Pine Ridge reservation. 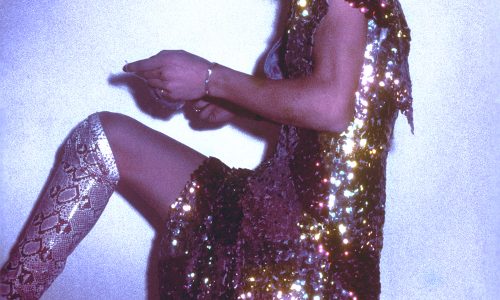